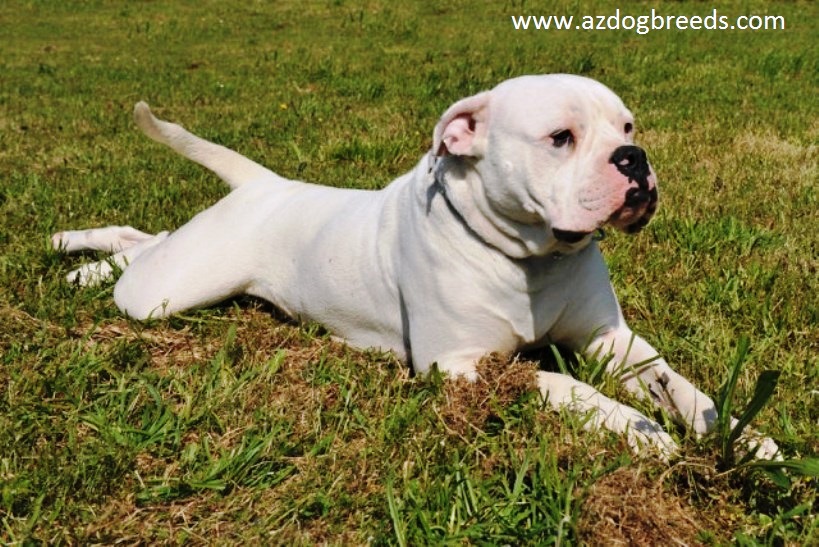 American Bulldog is a working dog that is full of affection and devotion for his owner. These medium sized dogs love be around small children. They are generally friendly with other pets in the house with early socialization. This breed is more sturdy and hardy as compared to its English counterpart.

The breed is considered to be a powerhouse of strength and endurance thereby making it suitable for all kinds of endeavors, whether hunting small animals, hunting large animals, guarding the livestock, tracking or weight pulling. Earlier, these dogs were also known as American Pit Bulldogs. But, the breed was named “American Bulldog” in order to avoid confusion between this breed and another separate breed called American Pit Bull Terrier.

These agile and powerful dogs are characterized by athletic, heavy boned and well built bodies. Their long and muscular legs help these dogs to run faster with better agility. They tend to have bulky heads and powerful jaws. The nose can be black, brown or red in color.

Color: Solid white or white with patches of a variety of colors like red, brown, tan, brindle, fawn, piebald etc.
Height: The average height for male Bulldog ranges from 22 to 27 inches. In case of females, it is 20 to 25 inches.
Weight: These dogs are generally 70 to 120 pounds in weight. Female ones usually weigh around 60 to 100 pounds.

This breed is quite strong and hardy. Thus, these dogs are not prone to too many health issues. Still, being a medium sized dog, the American Bulldog is prone to develop hip dysplasia, elbow dysplasia or other degenerative joint diseases.

Besides, these dogs are also susceptible to bone cancer, mast cell tumors and heart murmurs. Skin and eye problems like Entropian and Ectropian are also quite common in this breed of dogs. They are sensitive to temperature extremes and likely to drool.

Life Expectancy: They can live up to 15 or 16 years in healthy condition.
Litter Size: The average litter size of is 11 puppies.

The short and close fitted American Bulldog coat is hard in texture. These dogs shed regularly and hence require regular grooming for the maintenance of the coat. But, as the coat consists of short hair, it is relatively easy to care for. It can be brushed with a firm bristle brush or rubber mitt at least once in a week.

The whiskers can be trimmed to give a clean look. These dogs are generally clean and do not require frequent bathing. Nail trimming grooming activity should also be carried out on a weekly basis. American Bulldog grooming also calls for regular ear cleaning, preferably with the help of baby oil. This helps avoid irritating ear infections to a large extent.

This dog breed is a gentle, protective, loyal, obedient, reliable, friendly, courageous, inquisitive, intelligent, alert, outgoing, confident dog breed. They can exhibit streaks of determined and strong willed behavior but it can be handled with firm and consistent obedience training. Their chasing instincts may be aroused by the quick movements of small animals.

Though, bold and fearless in temperament, still these dogs never demonstrate an overly aggressive behavior. Some effort might be required to keep them disciplined as they are generally not self disciplined. These dogs are regarded as wonderful family pets with early socialization. American Bulldogs make for excellent watchdogs too.

This versatile dog is always busy looking for ways and means to please his owners. Therefore, it is the duty of the owners to take care of their dogs’ physical as well as mental health. In apartment situation, these dogs require average sized yards for physical activity as they tend to be quite inactive indoors.

Plus, interactive play sessions and daily one-hour brisk walks are also necessary to keep them in good health by providing sufficient physical and mental stimulation. Experienced dog owners or owners with a firm hand are generally good for these bossy and dominant dogs. This is quite a rare and expensive breed dog.