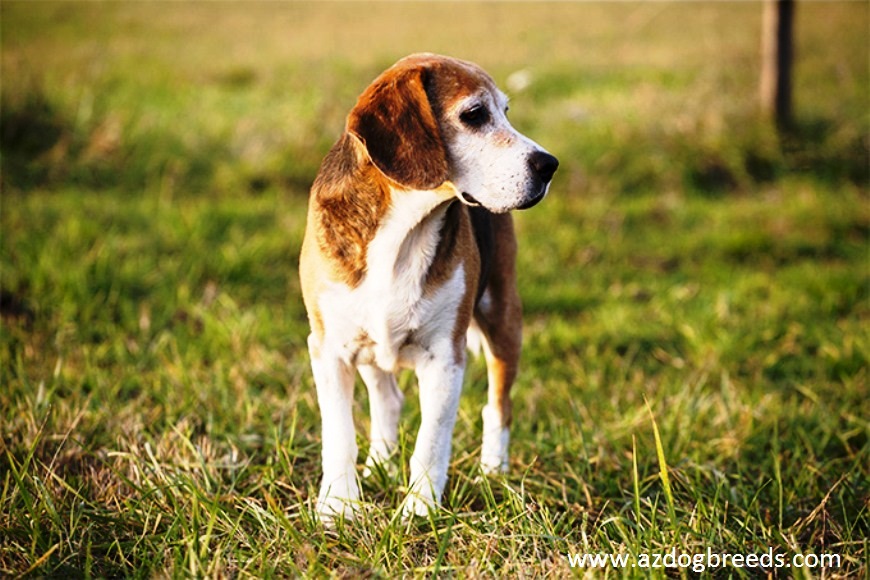 American Foxhound is a loving, loyal, easy going but independent medium to large sized scent hound. These handsome looking agile hunters were originally bred for fox hunting. Rumor has it that during the 17th century, these dogs were used to hunt down Indians.

History of this breed can be traced back to 1650 when Robert Brooke brought the first English Foxhound to the United States. Hence, these dogs are considered to be descendants of English Hounds.

Thus, crossbreeding of these dogs with French Hounds created American Foxhound dog breed. Later, strains of other English, French and Irish hounds were also added to develop these dogs with better speed, endurance and sense of smell.

These dogs are characterized by leaner build and lighter bone structure as compared to English Foxhounds. Forelegs are straight, muscular and well boned. The fox-like feet are close and firm with well arched toes.

Head is long and skull is slightly domed. Muzzle is long and stop is moderately defined. Ears are thin, short, rounded at edges and moderately set apart. Eyes are large and soft bearing a hound-like expression. Color of eyes can be brown or hazel.

Color: These dogs both male and female are available in a variety of colors. Bi color and tricolor patterns are more common.
Height: The average height of these dogs is about 21 to 25 inches.
Weight: The average weight of American Foxhound ranges between 65 to 75 pounds.

These dogs generally remain healthy and are not vulnerable to hip dysplasia and other such genetic health concerns common in most of the large-sized breeds.

Nonetheless, they tend to gain weight soon. Issues of thrombopathy (blood platelet abnormality) have also been reported but it is quite rare.

Life Expectancy: Average life span of these dogs is about 10 to 12 years.
Litter Size: Average American Foxhound litter size is 5 to 7 puppies.

The smooth, close fitting, short to medium length hair coat of these dogs is easy to care for. You just need to brush the average shedding hair coat occasionally with the help of a firm bristle brush to remove loose hair.

Other grooming responsibilities include tasks like trimming the toenails, checking and cleaning ears, brushing teeth and so on. Besides, it is suggested that you bathe your beloved doggy only when necessary.

American Foxhound puppies can be trained and socialized moderately right from the beginning so that they get along well with other household pets; supervision may be required around non canine pets. Plus, these dogs are usually good with kids.

Though mostly friendly still, at times these dogs may become reserved with unfamiliar faces. These dogs are highly responsive and do best with firm, consistent, routine training. However, they may be difficult to housebreak.

These active and energetic dogs are best suited for active families because they require plenty of exercise to remain healthy and happy. Therefore, they need vigorous exercise on daily basis.

They enjoy hunting activities and do well with long daily brisk walks or jogs. Lack of adequate physical and mental stimulation can give rise to restlessness and destructive behavior.

These agile dogs are extremely active indoors and are usually not recommended for apartment living. Besides, they do well when provided access to ample space in an acreage.

These breed dogs are well known for their distinctive melodious barks. The breed has been designated as Virginia’s State Dog since 1966.