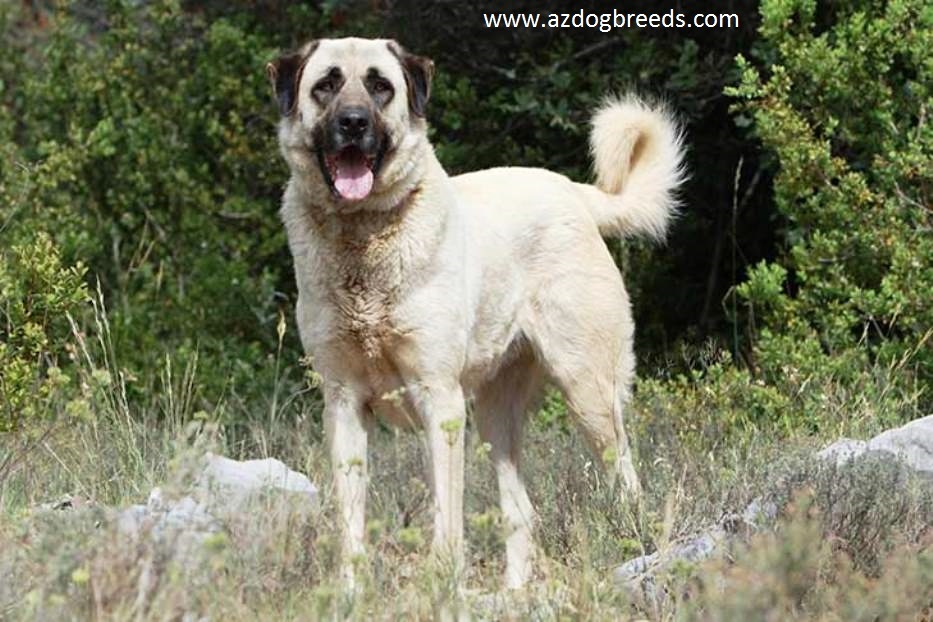 Anatolian Shepherd Dog breed is a large sized breed with strong protective instincts. These dogs are considered as a good livestock guardians and possess remarkable endurance and agility. Earlier, they were also used for the purpose of hunting and as combat dogs in wars.

This ancient guardian breed is believed to have originated in central Turkey. Appearance wise, these dogs are quite similar to Great Pyrenees dogs and are believed to be closely related to Kangal dogs. Certain other names for these dogs are Karabas, Anatolian Karabas, Coban Kopegi etc.

This Dog breed is characterized by a strong, powerful and muscular build. The head is broad and slightly rounded. There is a slight stop. The muzzle is rectangular in shape and black in color.

The almond shaped eyes are medium in size and dark brown to light amber in color. The eye rims are black in color but tend to be brown in case of liver colored dogs. The V shaped pendent ears with rounded tips are not erect but dropped to sides.

Color: The hair coat of this Dog breed is available in a variety of colors such as white, fawn, brindle, etc.
Height: The average height of these dogs is usually 28 to 30 inches. Bitches are generally a bit shorter, that is, 26 to 28 inches in height.
Weight: The ideal weight ranges between 100 to 150 pounds. The females are usually 90 to 130 pounds in weight.

Some common health issues in these dogs are Thyroid Disorders, Ectropion, sensitivity to anesthesia etc. As these dogs are huge in size, they are also prone to Hip Dysplasia. Some dogs may also be susceptible to skin related problems and allergies.

Life Expectancy: The average dog life expectancy is about 12 to 15 years.
Litter Size: 5 to 10 puppies

So, dog grooming essentially consists of weekly brushing and combing of the hair coat. The hair coat needs to be brushed with carefully and regularly during the shedding seasons, two times in a year when they shed the under coat heavily. These dogs are relatively clean and need to be bathed only when necessary.

The Dog temperament is calm, loyal, courageous, protective, sensitive, territorial, intelligent and alert. These dogs tend to be good with kids and other pets in the house, provided they are adequately introduced and socialized early.

They need to be supervised around small children as they can accidentally hurt children because of their large size. However, they are generally suspicious of strangers. These dogs tend to have a confident and independent personality but they are not aggressive. These responsive dogs are easy to train when right type of motivational methods are used with patience.

Anatolian Shepherd Dog breed is often characterized by long and deep barks, especially while performing watchdog duties. The ones that are specifically to be used as flock guards need to be handled differently as compared to the ones to be used as family pets.

These large sized dogs require plenty of exercise to remain physically fit and avoid destructive behaviors such as digging. Therefore, they need to be taken for long daily walks and provided with enough space in a properly fenced large sized yard for running and playing.

These working dogs are usually not considered suitable for sedentary and inexperienced first time dog owners who do not understand canine instincts well. In addition, as these dogs are relatively inactive indoors, they are usually not recommended for already passive and inactive apartment situation. Anatolian Shepherd Dog is a highly adaptable dog that can withstand harsh weather conditions.