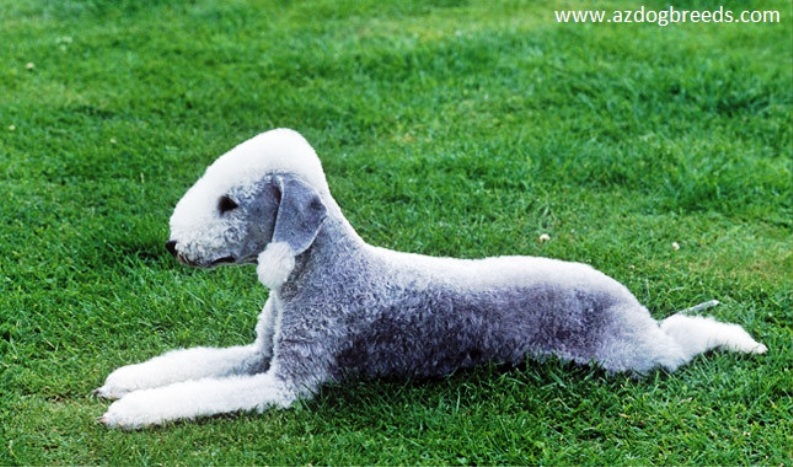 Bedlington Terrier Origin And Other Names

The Bedlington Terrier dogs, earlier known as the Rothbury Terrier or Rodbery Terrier dogs were originally developed in Northumberland, England. Appearance-wise, these dogs are quite similar to lambs.

They were primarily used by miners for the purpose of hunting rabbits, badgers and foxes. They were also used as fighting dogs.

The breed is believed to have been developed by the combination of Otterhounds and Dandie Dinmont Terriers. Some breeders also try to breed these graceful and affectionate terrier dogs with Whippets and Greyhounds to produce Lurchers.

The graceful yet agile Bedlington Terrier dog breed is characterized by well balanced build and a distinct pear-shaped head. The deep, obliquely set eyes are almond shaped and small in size. The color of the eyes depends on the color of the hair coat.

The low set ears with rounded tips are triangular in shape tend to hang flat on the cheeks. The well defined nose has large nostrils and like the eye color, the color of the nose also depends on the color of the hair coat.

Life Expectancy: On an average, these dogs can generally live up to 12-16 years. However, with proper care, they can also live longer than 17 years.
Litter Size: 3 to 6 puppies

These dogs do not shed much and are hence considered suitable for allergy sufferers. Grooming a Bedlington Terrier essentially consists of regular brushing of the thick double with a moderately stiff brush. The hair coat consists of a mixture of hard as well as soft hair.

These dogs need to be bathed only when necessary in order to retain the natural oils on the skin. The hair needs to be clipped every six weeks. These breed dogs being used for show purposes need more grooming, care and maintenance.

They are highly affectionate, friendly, loyal, reliable, lively, brave and intelligent. These dogs are usually playful and friendly around children. As for other pets in the house, they can be compatible with them when properly introduced and socialized right at the beginning.

Keeping Bedlington Terrier dogs with cats or other smaller animals can be quite troublesome because their quick movements can arouse the natural predatory instincts of these dogs. They are generally not reserved or aggressive with strangers.

Destructive behavior like excessive barking and meticulous digging is an inherent part of their personality. Hence, adequate training and socialization is necessary to keep these dogs disciplined. Apart from being delightful companion dogs, these smart and attentive dogs also make for good watchdogs.

Bedlington Terrier breed dogs are highly energetic and require adequate amount of physical as well as mental stimulation. However, they are less boisterous as compared to other terrier dogs. They are quite active indoors and hence tend to do well in apartment situation even without a yard.

Although, they need to be given adequate opportunity for physical exercise through play sessions and daily walks. As these dogs tend to become stubborn and bossy, they need to be controlled by firm and assertive experienced dog owners.