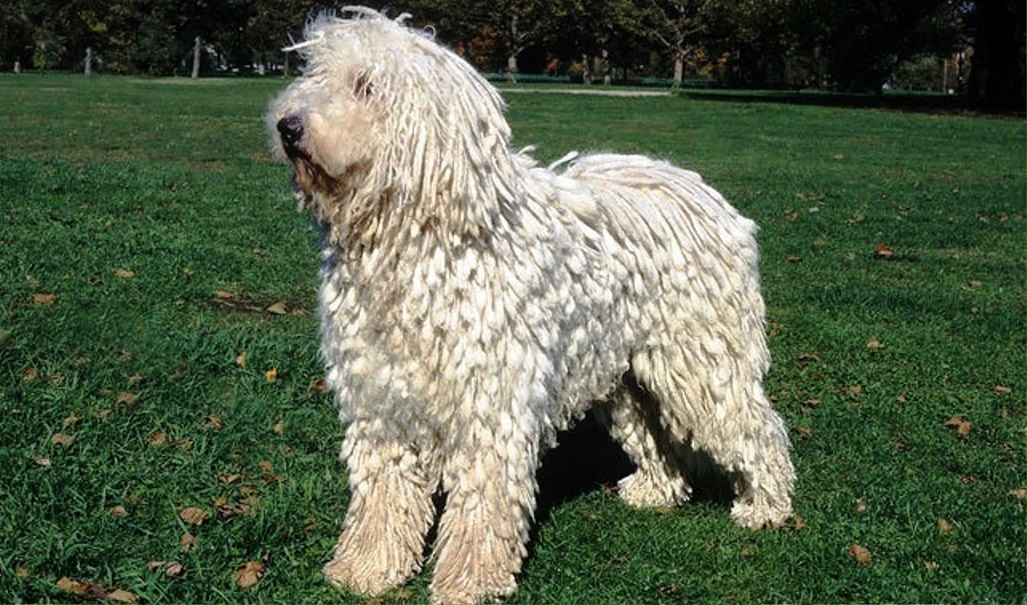 Komondor dog breed, also known as Hungarian Komondor or Hungarian Sheepdog is an ancient and rare breed that originated in Hungary. These dogs are considered as excellent flock guardians and are mostly bred to work independently. Therefore, they have the ability to protect flock without the assistance of their owners.

It is believed that nomadic Magyars brought these dogs to Hungary a thousand years ago. Recent studies, however, suggest that these dogs came from Cumans. Even the name Komondor could have been derived from the term Koman-dor, which means dog of the Cumans.

he breed first appeared in United States in 1933 and was recognized by AKC in 1937. Interestingly, these large sized dogs are also referred to as Mop Dogs because of their distinct corded hair coat. They are believed to have descended from Russian Owtcharka dogs.

Appearance-wise, these dogs are quite similar to Puli and Bergamasco dog breeds. These fast and powerful dogs are heavy boned and muscular. Head is large and broad. The almond shaped eyes are dark brown in color and medium in size.

The hanging ears are moderately set and slightly rounded at tips. There shape is somewhat like an elongated triangle. Nose is black and has wide nostrils. The hanging tail is long enough to reach the hocks and is slightly curved upwards.

Color: The hair coat is primarily white in color, but not necessarily pure white. Some buff or cream shading may be present in case of puppies that tends to fade with the passage of time.
Height: These dogs usually grow to about 25.5 inches or more.
Weight: The average weight of these dogs is about 100 to 132 pounds. Female Komondor tend to weigh around 88 to 110 pounds.

These dogs are prone to bloating, entropion, otitis externa and acute moist dermatitis. Being massive in size, these dogs are also susceptible to Hip Dysplasia. they have also been known to be vulnerable to ticks and fleas.

Life Expectancy: The average lifespan of these dogs is 10 to 12 years.
Litter Size: 3 to 10 puppies

The long, thick and corded double coat consisting of soft undercoat and coarse outer coat of a Komondor dog should never be brushed and combed. It simply needs to be trimmed.

During the cording process, larger mats may need to be separated into smaller ones. Shedding becomes minimal once the cords form. Cords usually form within two years. Because of such a distinct hair coat, the dog can blend easily with sheep while guarding them.

In addition, it is believed that the thick double coat helps protect the dog against injuries when wolves attack as the bites can not penetrate deeper in the skin. Other Komondor grooming activities include regularly clipping toenails, trimming hair between paw pads, checking and cleaning eyes and ears etc. Besides, the dog needs to be bathed frequently. The heavy hair coat may take a couple of days to dry completely.

These dogs are bold, intelligent, sensitive, devoted and independent. Although these dogs are affectionate and can to be good with kids and other household pets, they are not considered suitable for families because for their tendency to be fiercely protective and strong willed.

Thus, these highly dominant and territorial dogs need proper training and early socialization to avoid problem behaviors, especially aggressiveness. They are usually suspicious of strangers but loving towards the people they are familiar with. Komondor puppies are generally playful and energetic but tend to become relatively inactive and sluggish as they mature.

These sturdy working flock guards are capable of living outdoors for several months as they can tolerate different types of weather conditions. They require extensive exercise on a regular basis. When not involved in flock guarding work, they need to be taken for long daily brisk walks.

These dogs are likely to adapt well in apartment situation, provided they are exercised sufficiently. However, Komondor dogs are considered more suitable for country rural and suburban settings.