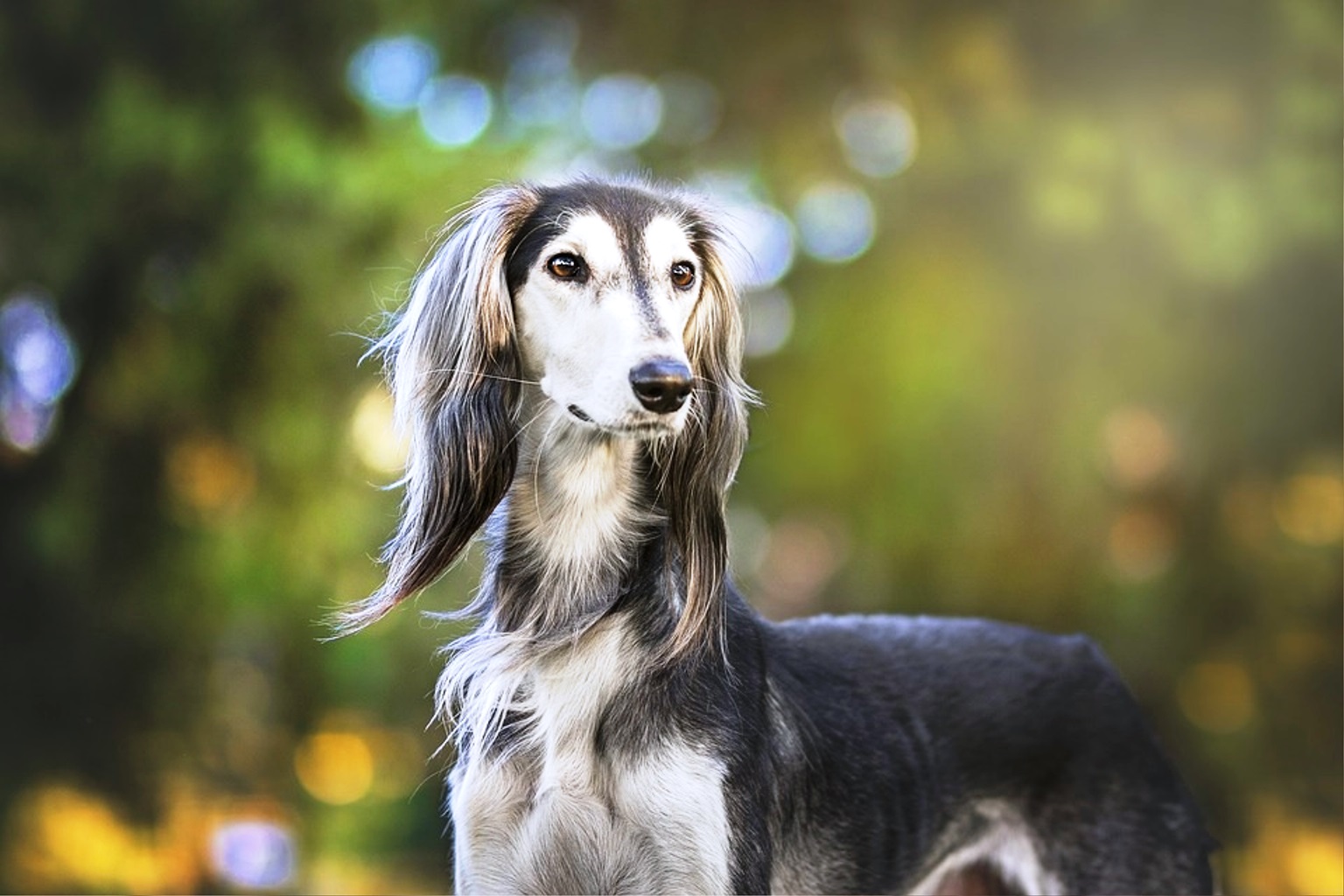 Saluki dog breed, also known as Persian Greyhound, is an ancient sighthound. The graceful dog is characterized by immense speed, endurance and stamina. The breed is also known by other names like Gazelle Hound, Persian Sighthound, Arabian Hound, Royal Dog of Egypt etc.

This member of the hound group is considered to be one of the oldest pure breeds. The breed is believed to have originated in Middle Eastern Region and closely related to Afghan Hound and Arabian Greyhound.

Images of these dogs have been found carved on ancient Egyptian tombs dating back to 2100 BC. These dogs were highly valued by Egyptian nobility and were even mummified alongside the bodies of Pharaohs themselves.

They were regarded as holy dogs and presented as esteemed gifts. Dogs that had a white patch on forehead were believed to have “the kiss of Allah” and were considered particularly sacred. Besides, these dogs were used for hunting gazelle, hare, fox and other such animals.

These tall, graceful and elegant dogs are quite similar to Greyhound dogs in appearance. Chest is deep and moderately narrow. Head is long and narrow. Eyes are large in size and oval in shape. Eye color tends to be dark to hazel.

The long ears hang close to the head. In order to protect the feet from rough terrain, feet have thick hair between the arched toes. Tail is long and well feathered. It is generally carried low.

These dogs are susceptible to cancer, heart conditions and genetic eye diseases like Progressive Retinal Atrophy, Lens Luxation etc. They are also prone to sunburn on nose and skin allergies. Besides, they are sensitive to anesthetic agents. Their diet is likely to be less than other dog breeds.

The grooming calls for weekly brushing and combing of the short hair coat, with special emphasis on feathered areas that have long hair. The average shedding coat is likely to be smooth and silky in texture with wooly feathering. There is another variety with no feathering but it is rare.

These dogs are extremely clean and free of doggy odor. Therefore, they need to be bathed only when necessary. Their ears should also be checked and cleaned from time to time to avoid infections.

The temperament is calm, friendly, loving, intelligent and extremely loyal. In fact, when living with a Saluki, you are sure to realize that the dog tends to become emotionally attached with the owners.

These dogs are usually gentle with kids, especially older kids who do not handle the dog roughly. They can be protective of children and other household pets.

These dogs are moderately trainable because they are obedient but a bit independent. They are quite sensitive and do not respond well to harsh training methods. Apart from training, Saluki puppies should be socialized right from the beginning to avoid problem behaviors.

They get along well with other pets. However, as these dogs have strong hunting instincts they should be supervised around non canine pets. These loyal and protective dogs make good watchdogs.

Besides, they are good at activities like agility training and lure coursing. These athletic dogs have the ability to run at speed of 35-40 mph for up to five miles.

These dogs are relatively inactive indoors and are generally not recommended for sedentary apartment situation because of their activity needs. Rather, they need to be provided with large areas, such as acreage to keep them engaged constructively.

Another interesting point about Saluki breed dogs is that although they enjoy playing outside, when it comes to sleeping they prefer to sleep indoors. Moreover, they are more comfortable in warmer climates.

As Saluki dogs are characterized by strong prey drive, they should not be left off lead in open spaces otherwise they can easily vanish from your sight in pursuit of moving objects, whether animals or vehicles.