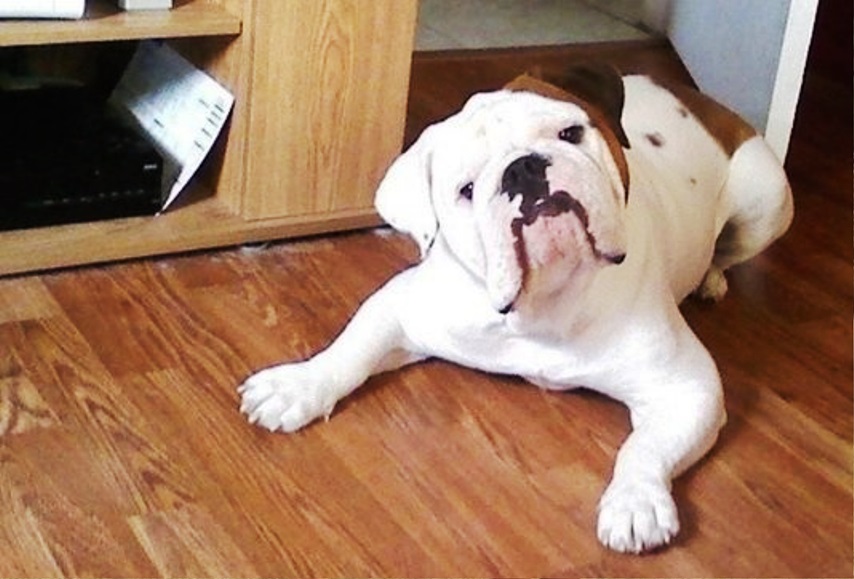 Though intimidating to look at, Victorian Bulldog dog breed is an affectionate and reliable dog breed that thrives on human companionship. The dog is medium to large in size and resembles English Bulldog. These dogs are recognized by the Victorian Bulldog Society (VBS) of Great Britain, Victorian Bulldog Foundation (VBF), Dog Registry of America (DRA) and Backwoods Bulldog Club (BBC).

The breed was developed by Mr. Ken Mollett in London in an attempt to revive Bulldogs as they existed during 1800s. In 1985, he started a breeding program with Graham Woods and his brother Derreck Mollett.

These dogs look similar to English Bulldogs but are comparatively larger in size. They are sturdy, athletic and thick boned. Head is large and muzzle is broad.

There is loose skin around the neck that forms dewlap on each side. Nose is mostly black in color with large and wide nostrils. Eyes are set low and wide apart. They have rose or button ears that are never cropped. Feet are round and compact.

Color: These dogs are available in a variety of colors such as solid white or pied, solid red, fawn, fallow and all brindles.
Height: The average height of these dogs is 17 to 19 inches. Female Victorian Bulldogs can be a bit shorter, that is, 16 to 19 inches.
Weight: These dogs are usually about 70 to 75 pounds in weight. Bitches tend to weigh 55 to 65 pounds, on an average.

As Mollett laid special emphasis on the breed’s health while recreating Victorian Bulldogs, these dogs are not susceptible to genetic health issues.
Life Expectancy: The average lifespan of these dogs is about 12 to 15 years.
Litter Size: The litter size is 2-5 puppies

The short and smooth hair coat of a Victorian Bulldog requires minimal grooming. Simply brush and comb the fine, average shedding hair coat on a weekly basis with the help of a firm bristle brush.

There is no need to bathe your beloved doggy unless necessary. Though, you can clean the dog’s wrinkles and skin folds with a moist cloth every day. Other Victorian Bulldog grooming responsibilities include trimming toenails, brushing teeth, checking and cleaning eyes and ears and so on.

The temperament is gentle, loving, loyal, playful, intelligent and courageous. These dogs love to be around humans and crave human attention. They are good with kids.

Besides, these dogs are compatible with other pets in the house. However, they can be aggressive towards unfamiliar dogs. These affectionate dogs make excellent family pets for families that have sufficient time and dedication for their pets.

In addition, they are also endowed with good guarding abilities but they usually do not become aggressive towards strangers. They require gentle obedience training and early socialization to avoid behavioral problems.

These athletic dogs need moderate amount of exercise. They love to walk for miles and run free in open spaces. Therefore, these dogs immensely enjoy the ritual of long daily walks.

They tend to be relatively inactive indoors and do well in apartment situations, especially when provided with at least an average sized yard for playing.

Before choosing Victorian Bulldog, keep in mind that this is an indoor dog that is considered suitable for temperate climates as the dog cannot tolerate extremely cold or hot weather conditions.